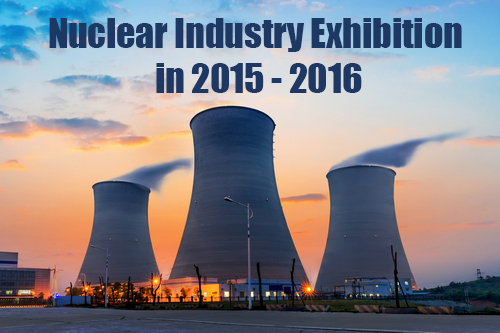 While Russia is actively developing its domestic nuclear power engineering in many regions, the country is also one of the world’s leading suppliers of materials, equipment and technologies for the construction and operation of nuclear power plants.  It has large contracts with companies from India, China, Vietnam, Iran, Turkey, Finland, Bangladesh, and UAE, and is currently thinking about partner relationships with a number of other countries.

Nuclear industry events are organized for specialists and not for general public. The focus here is not on visual effects and shows, but rather on serious analysis of reliable statics, detailed exploration of other countries’ expertise in technologies and maintenance, and of course, safe operation and disposal of waste.

Russia’s largest specialized international forum ATOMEX will take place at Expocentre, Moscow, on 13–15 October. Apart from the opportunity to present their production, suppliers and their partners will learn about the process of purchasing innovation equipment, terms and conditions of procurement to large corporations, they will get a chance to visit the industry conference and conduct business meetings and negotiations. For the year 2015, Rosatom State Atomic Energy Corporation has planned 28.5 thousand purchases for the total amount of over 833 billion rubles.

On 9–11 November, the World Trade Centre Moscow is hosting AtomECO-2015, an inter-industry forum Moscow International Exhibition and Conferencel. The scope of ecological issues on the agenda includes: radioactive waste and spent fuel, decommissioning of nuclear sites and facilities, ecological rehabilitation. This event is held every two years.

In early September, 8–10, CINE 2015 will take place in Beijing. Last year, as many as 500 companies from 20 countries presented their expositions at this China International Nuclear Power Equipment Exhibition, including Canada, Finland, France, Italy, Belgium, Japan, Russia, South Korea, Spain, Netherlands, Ukraine, Great Britain, USA, and the hosting country – China. At the exhibition there were some 800 exhibition stands. The event was visited by over 127 thousand people, most of who were nuclear industry specialists.

A specialized exhibition for the development of nuclear power engineering INDIA NUCLEAR ENERGY will take place in the city of Mumbai, the capital of India, on 15–16 October, 2015. Its sections will include nuclear and conventional power technologies, development of automated control systems and instruments, maintenance and waste disposal, nuclear safety, etc.

On 8–12 November, the winter session of the American Nuclear Society (ANS) is taking place in Washington. This year ANS is celebrating its 60th anniversary. Among the participants of the association are 1600 corporations, scientific and research institutes, state agencies from 40 countries. As part of this meeting, there will be held a specialized exhibition of nuclear technologies Nuclear Technology Expo.

In early 2016, on 20–21 January, the development of nuclear power engineering in South-East Asia will be discussed in terms of the regional exhibition NUCLEAR POWER ASIA 2015 in Jakarta, Indonesia. The South-East Asia region is one of the most dynamically developing industrial regions. In 2015, the exhibition was held in Kuala Lumpur, Malaysia, attracting 343 nuclear experts from 150 companies representing 31 countries.

Already in summer 2016, on 28–30 June, Paris is hosting the biennial World Nuclear Exhibition. WNE is one of the most reputable specialized exhibitions for nuclear industry. In 2014, as many as 495 companies displayed their expositions on the total area of 17,800 sq. m. Representatives of Argentina, China, Finland, France, Germany, Japan, Russia, Spain, Great Britain and the USA organized 10 national pavilions.  The exhibition was visited by 7,215 people from 71 countries.
Over the three days of the event, there were held about 2000 business meetings, including meetings with 50 VIP persons. The events were covered by journalists from 160 mass media. As part of the exhibition, the organizers are planning panel discussions and workshops devoted to international cooperation in the industry.

FRESHEXPO is ready to organize your company’s participation in any of the international nuclear power exhibitions! We offer a complete range of professional services for creating exclusive exhibition stands: from drawing up a design project to building, decorating and fitting the stand with exhibition equipment.
Trade Shows by Theme: Energy
Book a stand
Book a business trip